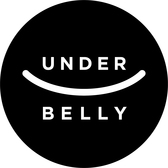 Stay up to date, be part of a community and show your support.

#106 in a series of wild and precious things to help you decide what is useful.